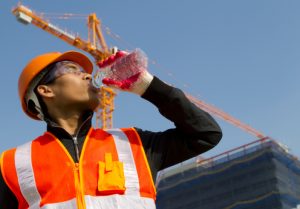 A drop in unemployment is a good thing for construction workers, and many in the industry are thrilled to see the latest news reported by Associated Builders and Contractors, Inc. Unemployment numbers for May, the most recent month for which data is available, have fallen to the lowest level since 2006.

While getting people back to work is unquestionably a good thing, a drop in unemployment also means people re-entering the labor force  after long hiatuses. Declining unemployment also means more opportunities for new people entering the construction workforce, which may result in increased hiring of  workers who do not have advanced training, qualifications and on-the-job experience.

An experienced workers' compensation lawyer knows when untrained workers come onto the job or when companies hire people who have been out of work for a long time, this new hiring can increase the chances of workplace accidents and injuries. Employers need to ensure all new hires get the training and supervision they need to stay safe and to avoid potentially serious or fatal on-the-job injuries.

Associated Builders and Contractors (ABC) indicates May unemployment rate for workers in the construction industry fell to 6.7 percent nationwide. The housing recovery has largely spurred the decline in construction unemployment, according to ABC. A dip in construction spending and severe winter weather had raised unemployment over the recent colder months but summer's arrival brings new employment opportunities and plenty of growth to the industry.

There are some drawbacks to increasing employment of new hires and people who have been out of work. Statistics show workers who are new to a job are three times more likely to be injured over the first month of work, compared to experienced coworkers.

The Institute for Work and Health says the risk of injuries among newly hired workers is greatest "among older workers, men and those in the goods sector, which includes construction."

The increased risk of work injury for new workers has persisted over 10 years of data. New workers are clearly not getting the supervision and training they need in order to stay safe and avoid being seriously hurt.

In a labor-intensive field like construction, where employees need to use hazardous equipment and machinery and are subject to myriad risks on work sites every day, it is imperative workers be taught how to avoid injuring themselves and others.

As employers bring on new workers in response to increased demands, it is important steps be taken to ensure a decline in unemployment isn't accompanied by a rise in serious injuries or deaths.