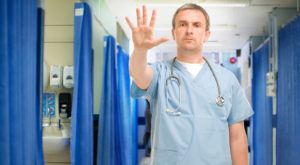 Emergency room doctors are critical to the safety and health of the public in Philadelphia. They work hard and endure some of the most egregious situations in order to help others and earn a living. It is unfortunate that every day they attend work, they're also at risk of being assaulted and injured.

Assaults against medical professionals are often committed by patients, as well as friends and family of patients. Many of these incidents involve patients who are under the influence of drugs or alcohol, involved in gang violence or domestic violence or suffering from mental illness.

Violence on the rise at a staggering rate

American College of Emergency Physicians, a Texas-based physicians' organization, surveyed more than 3,500 ER doctors throughout the United States. According to responses from participants:

A survey of Michigan ER doctors published in the Annals of Emergency Medicine found that 72 percent of respondents experienced violence on the job within the past year. Another 22 percent reported being in a perpetual state of fear of an assault.

What to do if you were assaulted on the job

ER doctors in Philadelphia should be able to perform their job functions without the fear of experiencing violence. When violence occurs, physicians may not only sustain physical injuries, they may suffer from debilitating mental and emotional trauma.

This can leave ER doctors out of work for an extended period. Recovery from physical injuries may require surgery, pain medication, physical therapy, and other costly procedures. Even after recovering physically, victims may undergo months of treatment for their mental and emotional health.

If you've been injured on the job due to workplace violence, you may be entitled to workers' compensation benefits. The claims process can be complex and overwhelming. Let an attorney at The Law Offices of Richard A. Jaffe, LLC do the work for you. Our experienced legal team will ensure that all paperwork is filled out correctly and all evidence and documentation made available to support your claim.